From Wikipedia, the free encyclopedia
Jump to navigation Jump to search
This article is about the size criteria for ships travelling through the Panama Canal. For the medicine named "Panamax", see Paracetamol.

Panamax and New Panamax (or Neopanamax) are terms for the size limits for ships travelling through the Panama Canal. The limits and requirements are published by the Panama Canal Authority (ACP) in a publication titled "Vessel Requirements".[1] These requirements also describe topics like exceptional dry seasonal limits, propulsion, communications, and detailed ship design.

The allowable size is limited by the width and length of the available lock chambers, by the depth of water in the canal, and by the height of the Bridge of the Americas since that bridge's construction. These dimensions give clear parameters for ships destined to traverse the Panama Canal and have influenced the design of cargo ships, naval vessels, and passenger ships.

Panamax specifications have been in effect since the opening of the canal in 1914. In 2009 the ACP published the New Panamax specification[2] which came into effect when the canal's third set of locks, larger than the original two, opened on 26 June 2016. Ships that do not fall within the Panamax-sizes are called post-Panamax or super-Panamax.

The increasing prevalence of vessels of the maximum size is a problem for the canal, as a Panamax ship is a tight fit that requires precise control of the vessel in the locks, possibly resulting in longer lock time, and requiring that these ships transit in daylight. Because the largest ships traveling in opposite directions cannot pass safely within the Culebra Cut, the canal effectively operates an alternating one-way system for these ships. 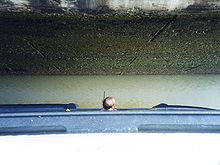 An officer monitors the clearance of the cruise ship MS Ryndam as she traverses the lock. 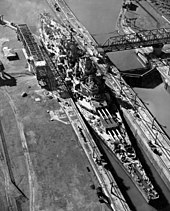 USS Missouri, one of the Iowa-class battleships, makes a very tight fit as she passes through the Miraflores Locks of the Panama Canal in October 1945.

The maximum dimensions allowed for a ship transiting the canal using the original locks and the new locks (New Panamax) are:[1]

The maximum allowable draft is 39.5 ft (12.04 m) in Tropical Fresh Water (TFW). The name and definition of TFW is created by ACP using the freshwater Lake Gatún as a reference, since this is the determination of the maximum draft. The salinity and temperature of water affect its density, and hence how deep a ship will float in the water. Tropical Fresh Water (TFW) is fresh water of Lake Gatún, with density 0.9954 g/cm3, at 29.1 °C (84 °F).[3] The physical limit is set by the lower (seaside) entrance of the Pedro Miguel locks. When the water level in Lake Gatún is low during an exceptionally dry season the maximum permitted draft may be reduced. Such a restriction is published three weeks in advance, so ship loading plans can take appropriate measures.

New Panamax increases allowable draft to 15.2 m (49.9 ft),[2] however due to low rainfall, the canal authority limited draft to 43 feet when the new locks opened in June 2016, increasing it to 44 feet (13.41 meters), in August "based on the current level of Gatun Lake and the weather forecast for the following weeks."[4]

Vessel height is limited to 190 ft (57.91 m) measured from the waterline to the vessel's highest point; the limit also pertains to New Panamax in order to pass under the Bridge of the Americas at Balboa harbor. Exception: 205 ft (62.5 m) when passage at low water (MLWS) at Balboa is possible.[citation needed]

All exceptions are typically allowed only after specific request and an investigation, and on a once- or twice-only basis.[citation needed]

As early as the 1930s, new locks were proposed for the Panama Canal to ease congestion and to allow larger ships to pass. The project was abandoned in 1942.

On October 22, 2006, the Panama Canal Authority (with the support of the Electoral Tribunal) held a referendum for Panamanian citizens to vote on the Panama Canal expansion project. The expansion was approved by a wide margin, with support from about 78% of voters. Construction began in 2007, and after several delays, the new locks opened for commercial traffic on 26 June 2016.[9] 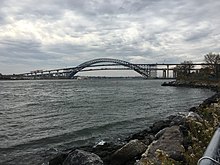 Navigational clearance under the Bayonne Bridge in New York harbor was increased to accommodate New Panamax ships by building a new, higher roadway inside the arch and then removing the lower roadway. 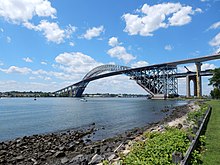 Bayonne Bridge with old roadway removed over the water.

Several ports, including the ports of New York and New Jersey, Norfolk, and Baltimore, all on the East Coast of the United States, have already increased their depth to at least 50 feet (15 m) to accommodate New Panamax ships; in 2015 the Port of Miami achieved the same in a project known as the "Deep Dredge"[13] and is the closest deep-water port to the Panama Canal in the US. Liverpool built a new container terminal, Liverpool2, where ships berth in the tidal river rather than in the enclosed docks, coinciding with the opening of the widened Panama Canal locks. In Halifax a major expansion of the South End Container Terminal was completed in 2012, extending the pier and increasing the berth depth from 14.5 to 16 metres (48 to 52 ft).[14] In 2017, the Port Authority of New York and New Jersey raised the clearance of the Bayonne Bridge to 215 feet (66 m), at a cost of $1.7 billion, to allow New Panamax ships to reach container port facilities at Port Newark–Elizabeth Marine Terminal.[15] Previously, only GCT Bayonne, Global Container, could handle the New Panamax ships.

As of April 2012, a controversy between Savannah, Georgia, and Charleston, South Carolina, over limited federal funding for dredging/deepening projects—including both state and federal lawsuits filed by environmental groups in both states opposing the techniques planned to be used in dredging the Savannah River—also revolves around attracting the business of carriers whose fleets include New Panamax vessels. Jacksonville, Florida, is pursuing its "Mile Point" project with the prospect of deepening the St. John's River in anticipation of Post-Panamax traffic; Mobile, Alabama, has completed the deepening of its harbor to 45 feet (14 m) for the same reason; and other ports seem likely to follow suit.[citation needed]

A New-Panamax ship, the CMA CGM Theodore Roosevelt, about to transit New York Harbor via the heightened Bayonne Bridge

Due to the expansion, demand for 'Old Panamax' ships has plummetted, resulting in ships being traded at scrap value. Some ships only 7 years old have been sold for scrap.[16][17] 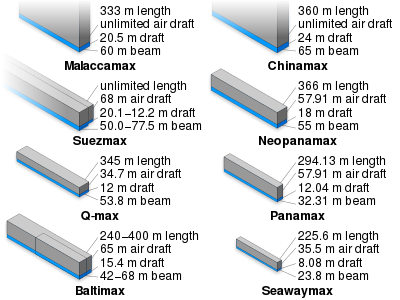 Post-Panamax or over-Panamax denote ships larger than Panamax that do not fit in the original canal locks, such as supertankers and the largest modern container and passenger ships. The first post-Panamax ship was the RMS Queen Mary, launched in 1934, built with a 118-foot beam as she was intended solely for North Atlantic passenger runs. When she was moved to Long Beach, California, as a tourist attraction in 1967, a lengthy voyage around Cape Horn was necessary.[19] The first post-Panamax warships were the Japanese Yamato-class battleships, launched in 1940.[20] Until World War II, the United States Navy required that all of their warships be capable of transiting the Panama Canal. The first US Navy warship design to exceed Panamax limits was the Montana-class battleship, designed circa 1940 but never built. The limit was specifically removed by the Secretary of the Navy on 12 February 1940, with the (never-realized) prospect of a new set of 140-foot wide locks to be built for the Canal.[21] The Essex-class aircraft carriers were designed with a folding deck-edge elevator to meet Panamax limits; the limit did not apply to subsequent US aircraft carriers.[22]